AND THAT’S WHY WE ROW DEAR


“Hey Momma, how did you and Daddy meet?”

Well, dear. The answer to your question happened a long time ago.  When your Daddy was a Junior at Lafayette College, his sister encouraged him to join the Crew Team.  Because he joined the Crew Team in college, he found the Baltimore Rowing Club after college.  He was lost, lonely and looking for friends.  And that’s where I come in.  I was lost, lonely and looking for friends too and joined the BRC for the same reasons Daddy did - to get a little exercise.

Daddy’s and my relationship started with a word: Nerd-Alert.  You see, I was sitting on a log next to my roommate Sheila, who was also learning to row, when her boyfriend Will walked by.  I teased the heck out of Will all the time and on this particular occasion I called him “Nerd-Alert.” As it so happens, your Daddy was walking alongside Will at the same time.  He stopped short, looked around, then saw me.  He thought I called him “Nerd-Alert.”  What can I say; it was love at first sight.

Later that season, when I failed miserably as a bowman, the team threw me into the coxswain seat and told me to steer the boat.  They didn’t bother giving me a cox box because even spectators on the shore could hear me shout, “give me ten.”

We had so much fun rowing, your Daddy and me.  Daddy taught me how to steer the boat and made it possible for me to compete at The Head of Charles as a coxswain.  By the way, did I ever tell you about the day Robert Redford showed up at the boathouse?  It’s true!  In 1988, Robert Redford campaigned for Presidential Candidate Michael Dukakis on the shores of the Middle Branch River and I was there! (What do you mean you don’t know who Robert Redford is?) 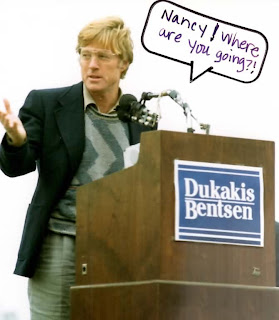 Anyway, Daddy and I don’t row anymore because we have you, Ape.  Bobby joined the WJ Crew Team the second week of his Freshman year.  It took a little convincing on my part but in the end Bobby realized I was right.  And today he’s a Nationals Petit Finalist!  Next year, Tommy will discover I am right too when he learns to row.  Then, in seven years’ time, you will benefit from the wealth of my wisdom when you discover there is money for college for women who row.

And so dear, because of Crew, I have you.  And that’s why we Voits row.

Posted by NITWit at 9:14 AM No comments:

REVENGE IS SWEET
Having the last laugh is the best revenge, isn’t it?

Today, after being away for nearly 2 weeks, Eric is tired, slow to motivate, and he wants me to cheer him up.  To do that I must sit on him, literally, and talk to him.  I can talk about anything I want; he just wants me to help him take his mind off of work for a few minutes.  That’s not such a tall order.  However, I have a lot on my plate this morning and I want to get on with it which means now I am irritated. But I sit there anyway and begin to tell him a story-

“Last week the cleaning lady pissed me off.  She knew I was running behind schedule; I told her so when she arrived.  You know I love her but she wouldn’t leave me alone about your soap.  She chased me around the house telling me that I had to stop using bar soap in the shower.  I told her it was yours but she wouldn’t let it go.  So you know what I've been doing this week?  I’ve been steam cleaning the entire house so that when she returns in next week, she’ll have nothing to do.  How’s that for getting even!”

“Well yes, I do get mad at you.  And I used to try and get even with you too – at least until you hurt your foot.  I purposely moved stuff in your way like the settee at the end of our bed so you would bang your big toe on it when you came in our room late at night.  You’re always waking me up.  And that’s why I did it; so you would feel my pain.”

After that Eric released me. Within an hour, he was back and hovering as usual.  I reminded him that blue-balls is another form of revenge.  With that, I walked out of the room to flip the bacon.  When I turned around, he scared the be-jesus out of me because I didn’t hear him follow me into the kitchen.    And then he laughed and said:

“Is that a masque on your face?  SWEET!”

Posted by NITWit at 9:21 AM No comments: