August 22nd, 2014, I participated in my first-ever citizen science project.  Cricket Crawl DC Baltimore 2014 is a project started by ANS* insect teacher Cathy Stragar for the Natural History Society of Maryland.  What follows recaps my adventures including the scope of the project which was simply this:

Pick a place to listen to crickets and katydids singing after 9 at night and in one minute record what you hear on the official Cricket Crawl data sheet. Submit your findings via email, twitter or instagram.  The study tracks 8 species whose calls are uploaded to SoundCloud and available for listening on the Cricket Crawl DC Baltimore 2014 Facebook page and website.

Cricket Crawl was fun, and despite not following the instructions completely, I'm happy to report that I heard more than I thought I would. I don’t tweet and I don’t twitter so when I re-read the instructions the next day, I discovered too late that I needed to email my results immediately. I felt badly.  I emailed my teacher hoping for the best... the best being that my data was included in the study.  Like the insects I was listening to, all I wanted was to be counted.

I've stared long and hard at bugs before, whether I knew what I was looking at or not, because I find bugs interesting.  (Who doesn't when you consider that insects comprise 75% of the animal kingdom?)  Since taking Insect Life at ANS this summer, I've learned a little more about identifying insects, sorting them by class and have started paying closer attention to who's playing "summer's symphony" day and night.

When all the insects sing, it's difficult to distinguish individual calls and name each one properly. Oh the noise, noise, noise. But when I stepped out my front door to begin cricket crawling, I singled out the Lesser Anglewing immediately.  Amid the cacophony, this crisp sound came from across the street. In fact, it probably came from my neighbor’s towering oak trees. But my target study area was Ayrlawn Park at the end of the street; it was time for me to move on.

When I reached the top of the park, I put down my paraphernalia which included two field guides, a clip board, flashlight, smart phone and a fancy-schmancy messenger bag to carry all this stuff and set up my chair.  I pulled out my smart phone, opened Facebook and began to listen for crickets.  But all I could hear was the “damn” sleigh bell ring of the tree crickets – sleigh bells drowned out all the other singers and they aren't on the Cricket Crawl SoundCloud survey.  So I grabbed my chair, packed my stuff and headed further into the open field where I set-up a new camp. That's when I really began to tune my ear and record my findings.

The first note I heard came from the Japanese Burrowing Cricket.  The second call was a Common True Katydid. As I trekked further into the 9-acre woods that flank Ayrlawn Park I heard the rest of the band play including a Jumping Bush Cricket and Fork-tailed Katydid.

However, I did not hear the common Field Cricket's classic chirp, nor the Greater Anglewing which sounds like a geiger counter, and neither did the Oblong-winged Katydid sing for me.  Its call is too high and out of my hearing range.  Like Goldilocks, I need everything "just right."

Since that night I have heard the Greater Anglewing sing in my neighbor's tree.  And last Saturday this Fork-tailed Katydid pictured below spent the evening with me.  I hoped it would tell me the story of how it lost a leg but instead it remained silent on the subject. 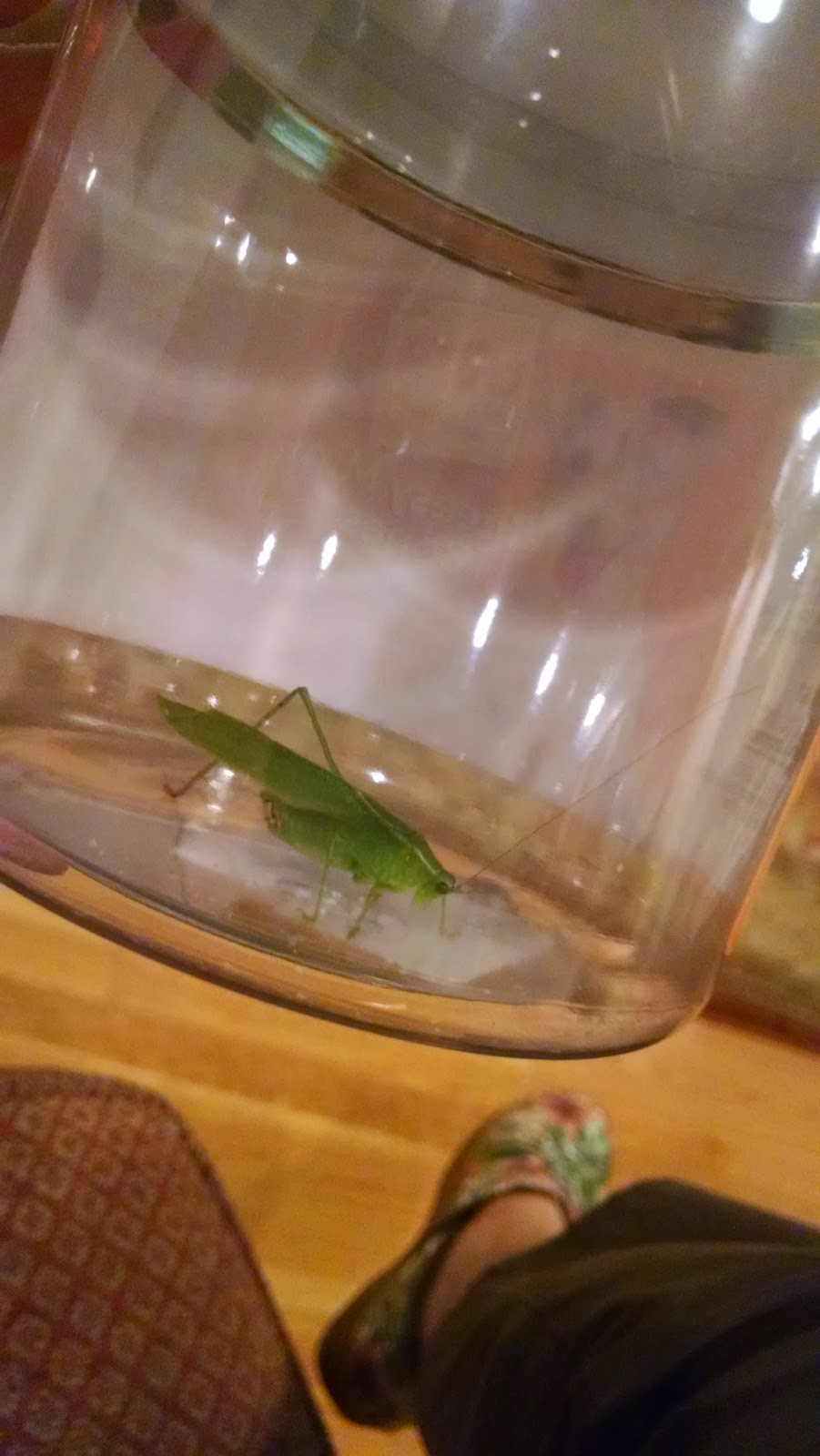 The good news is this: the crickets will continue to sing as long it's a dry night and the temperature doesn't drop below 60F.  If you want to tune your ear now for Cricket Crawl 2015 you can! Just follow this link to hear the species sing:  https://soundcloud.com/cricketcrawl2013

Posted by NITWit at 7:28 AM No comments: