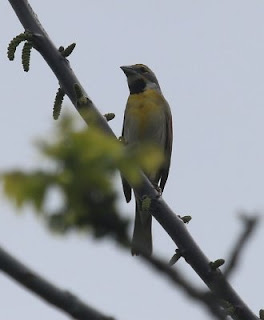 That’s a funny word. Say it ten times fast and try not laughing.

Dickcissel may not have been the last bird we counted but it was the last word on the 2019 Birdathon.  After hours of chasing birds across the beaches and wildlife preserves in Cape May and Brigantine, NJ, it was the Dickcissel we spent the most time trying to identify from Eric’s photo when we returned to our hosts house. No matter how old one is (15, 55, or 75,) some words bring out the sophomore in all of us. I forget how we concluded this little bird is a Dickcissel, but it is the last box that we checked on the American Birding Association official bird checklist. 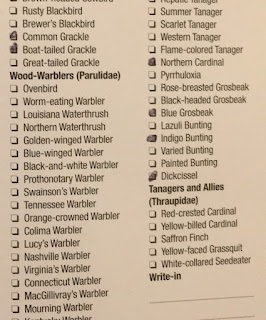 You could ask what are we doing and why, and the explanation is simple. We are birders and last weekend we counted birds to raise funds for the 39th Annual Bloomn Birdathon for Audubon Naturalist Society in Chevy Chase, MD. 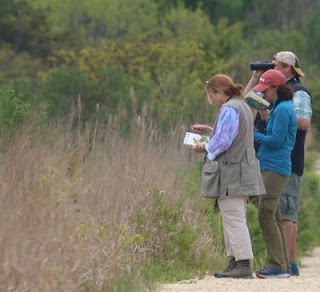 The rules of play are to count as many birds (or wildflower species) in a 24-hour time frame and to have fun while doing so. There are lots of highlights, but I will limit myself to Mikes original question when the weekend was over: What were your three favorite birds? And I said:


One. The little Common Yellowthroat. 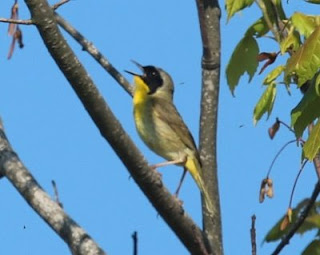 He throws back his head and then sings his heart out! Witchy-witchy-witch 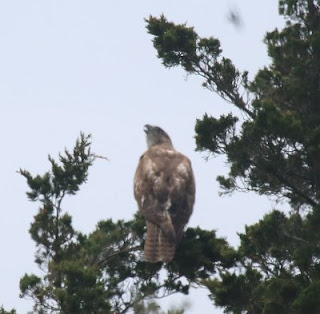 Poor little thing looked like he was screaming MOM, the crows wont leave me alone! 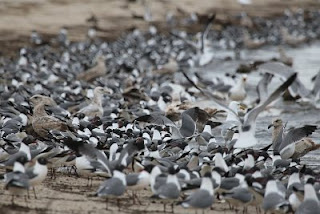 It is hard to believe that these regular gulls can be interesting but they are. They return to Cape May in March marking the start of Spring.  By mid-May, they flock in the tens of thousands to feast on horse shoe crab eggs along the shoreline.  Put this all together and it is what I call phenomena – Thousands of birds (or any species for that matter,) congregating and behaving according to their biological heritage.

Unbeknownst to me, the second Saturday in May is the World Series of Birding sponsored by the New Jersey Audubon. Everywhere we went, we met people doing the same thing we were - raising funds to support Birds.

At Coral Beach we ran into Vince and his gang who were in the middle of a Big Stay which started at 4 in the morning.  The premise is if you stay in one place long enough, all the birds will eventually fly to you. Apparently, they did because by 2PM, Vince and his gang counted 138 species including the Chuck-wills-Widow calling in the pre-dawn hours.  Thanks to Vince, our team saw the Northern Gannet and Mississippi Kite during our 20-Minute Stay.

At Higbee Beach we picked up Arthur who confirmed via the bird interweb that Mike really did see the Swallow-tailed Kite that flew overhead during the 15 minutes we all got separated.

When Eric made an unintentional turn onto the Ocean City causeway, we decided to stop at the visitor center where we ran into a group of Happy Campers who flew in specially to participate in the World Series. It was here that we saw these Yellow-crowned Night-Herons building their nest. 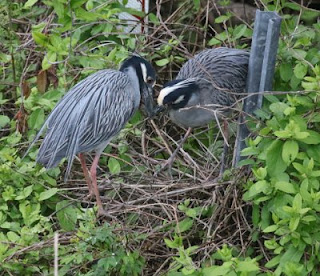 I asked my fellow teammates what were their favorite birds and here is what they said: 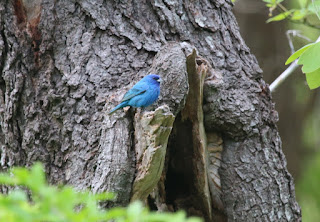 It’s hard for me to pick just one…
but I’m always delighted to see and hear Indigo Buntings, and we saw so many!

Also, I loved the flock of Skimmers standing facing the rain and wind, and flying en masse then suddenly a few would break off and do their skimming thing. 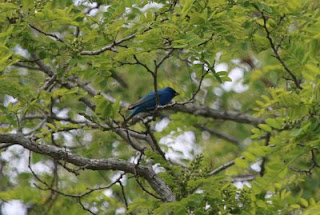 I love Indigo Buntings and seeing their rust-colored wing against his iridescent blue body. 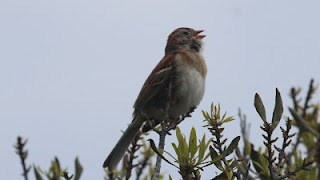 Second was watching the Field Sparrow sing with his whole body that
his tail feathers were quivering. 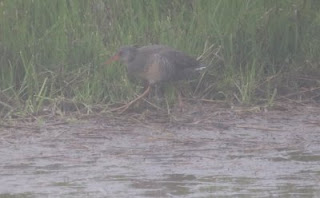 And I really liked seeing the Otter take off with a fish in his mouth, BUT
if has to be a bird, then it was the Clapper Rail skulking around the mud flats. 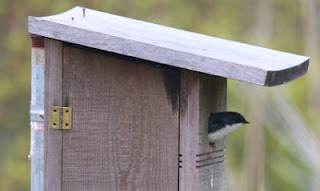 Starting Saturday, May 11 at 11AM to Sunday, May 12, 11AM, we snagged 95 birds breaking our first record of 87 species in 2018. We were hoping to spot 100 of course but that just means we have even more incentive next year to learn our Warbler songs before we get out and count!

If you haven’t already donated to the 2019 Bloomn Birdathon for Audubon Naturalist Society then I invite you to do so. Just follow this link and be sure to mention our team name: THIS ONES FOR JANE HUFF – who was an extraordinary birder and naturalist herself and my beloved mentor.  Here’s the link: https://anshome.org/birdathon-sponsor/?_sf_s=Birdathon 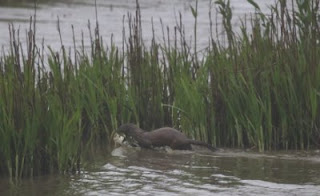 visit: http://www.voit.org/pic-x/Birdathon2019/index.html You will be glad did!


And now for the List of Birds which are grouped by name and phylogenic sequence according to the American Birding Association.  They are all there – count them!

For more photo out-takes visit: http://www.voit.org/pic-x/Birdathon2019/index.html You will be glad did!

Posted by NITWit at 6:44 PM No comments: