It’s becoming a guilty pleasure every time I visit Mom that Bea tells me I’m a good daughter and Newton strides over for a one-arm hug.  Mom is still having a difficult time adjusting to her new surroundings but I am seeing progress.  She is wrestling with her inner Girl Scout and calling up her can-do spirit.   The food is lousy but she eats it.  The room is spinning but she stands up.  She can’t remember she went to knitting but she will trust me if I tell her we did.

I thought dementia was simply about forgetting but apparently it is about a whole lot more and I am just beginning to figure it out.  It’s so painful to watch.  I’ve coined a phrase, “we don’t put our dogs through this,” but I don’t even know what I am saying.  Who is putting Mom through this?  Certainly not me.  Bea told me I’m a good daughter.

I know when I walk out the room, she doesn’t remember I came.  She can’t remember that she ate lunch in the dining room with her new friend Bea. She’s not even sure Bea is her new friend but she is starting to recognize her face.

A Cat Scan (not a Dog Scan,) shows Mom’s brain has shrunk.  I wonder if this is the reason the room spins for her now.  I ask and I’m told that isn’t dementia.  Who knows why the room spins, I certainly don’t and neither does anyone else.  And just when I thought Mom couldn’t reason anymore, she tells me what she’s got to do.  She’s got to stop trying to figure out what’s what and get stronger so she can walk out the door.  It’s her guilty pleasure and each day she’s dreaming about it.
Posted by NITWit at 7:13 PM No comments: 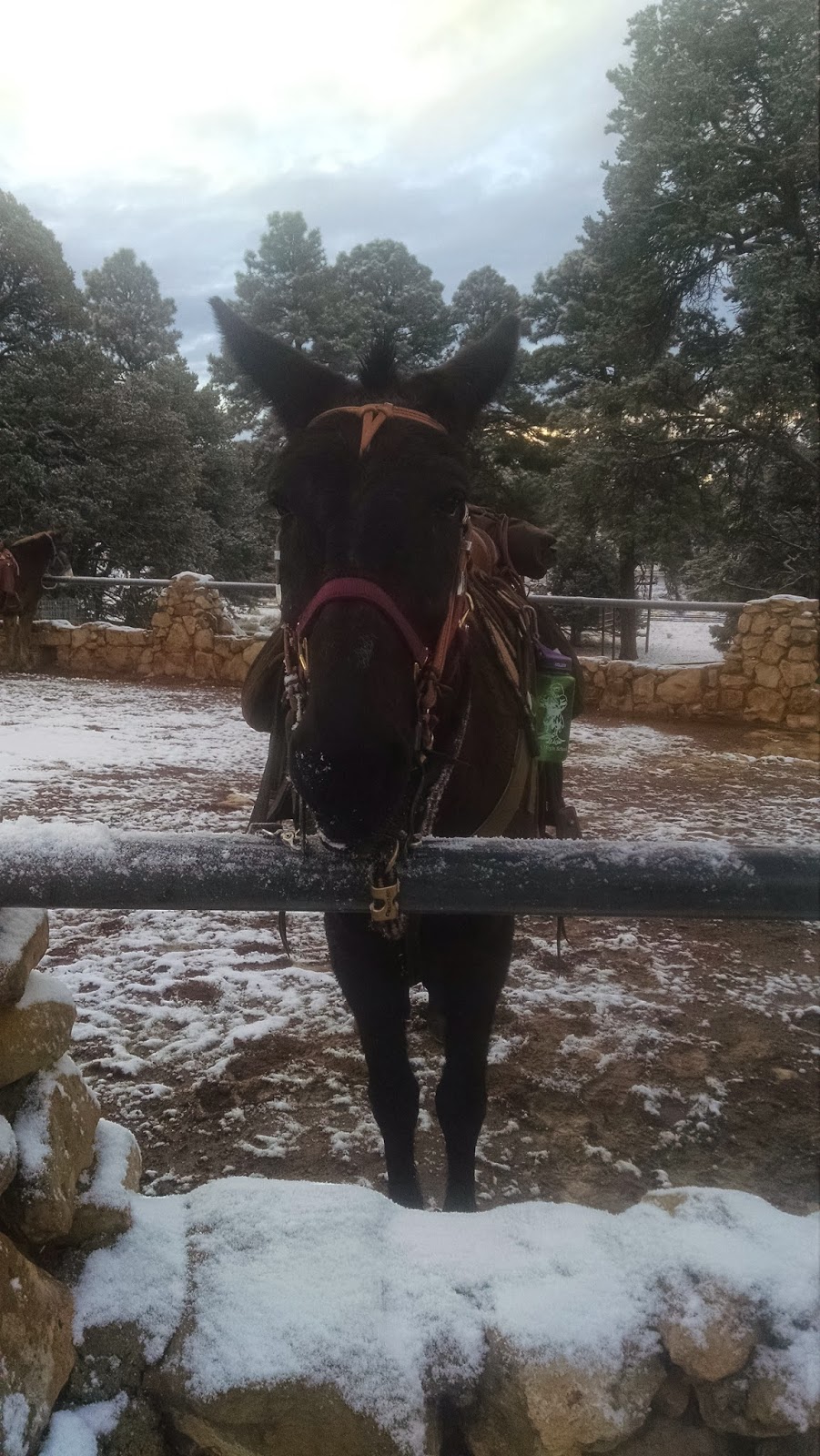 Listen to you heart
It’s pounding a message that only you can hear
Until tears spring your eyes, flood your face and you can’t catch your breath.

That’s when everyone finally knows what you’ve been telling them all along is true:

Eric said, “I hate Paris.” (Don’t know why since he’s never been to Paris.)

I said, “You can’t just say no.  You have to make a counter-offer.”

A few months later Eric came back with his counter offer: “I booked us a two-night stay at Phantom Ranch at the bottom of Grand Canyon.  I’m hiking and you’re taking the mule.”

I looked at him calmly and said, “I’m afraid of heights; why can’t I hike with you instead?”

In the month leading up to Grand Canyon, I started to feel a tourniquet on my heart.  I thought it was holiday stress... you know, Christmas is coming, the goose is getting fat, how the heck will I ever get the halls decked, the presents wrapped and still manage the holy peace that comes with celebrating my faith and relishing the love of family and friends surrounding me.  As the time to leave for Grand Canyon got closer, the pain in my chest got worse.  Around Thanksgiving I realized I was having a slow-burning panic attack about riding the mule 4,800 feet down into the canyon by myself while Eric hoofed it himself.  First I talked to my hairdresser; she suggested Vitamin B’s to calm my nerves.  Then I talked to my college roommate; she suggested Ativan to calm my nerves.  Then I talked to my neighbor who actually gave me Ativan.  In the end, I took my doggie’s masseuse’s advice and booked a trail ride at Rock Creek Horse Center to get the feel of riding on uneven terrain.  The ride was nice but I wasn’t convinced afterwards that I had in anyway simulated a canyon mule ride and gotten over my fear.  Subsequently, my chest still ached. 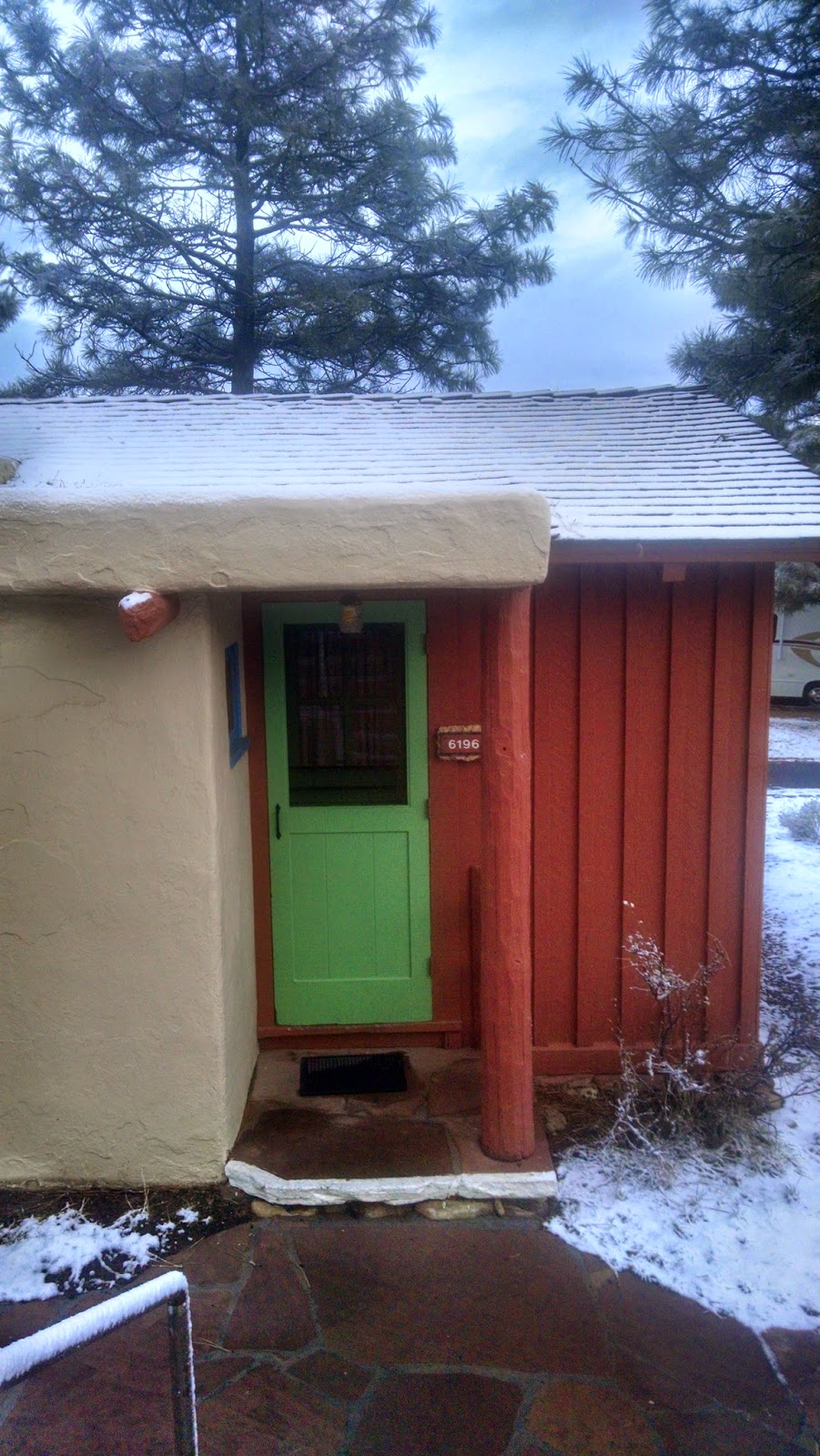 On December 12th, Eric and I boarded the plane, flew to Las Vegas, rented a car and drove past the Hoover Dam toward our final destination 4 hours away.  Eric booked us a cute little cabin; we ate at the bar and talked with a mountain hiker/biker from Flagstaff for the better part of the evening.  All was good until the next morning.

After a quick breakfast, I showed up at the ring and mounted Mabel, the fourth Mule in line.  Then our guide gave us the low down:

“The Mule ride is 5 hours.  You will have the opportunity to stretch your legs and eat after an hour and a half when we take a break.  No matter what, don’t let space come between you and the Mule in front of you or your Mule will run to catch up.  Use the Mule Motivator (also called a whip) on your Mule’s behind and not on your Mule's saddle.  Don’t ever lean or your Mule will lean the other way and mostly likely toward the thing you are trying to lean away from (read: the canyon ledge). Finally: the Mule ride is not for everyone.  After we have ridden for about 10 minutes, we’ll stop and see how everyone is doing.”

Right then and there I knew I had an out, but nevertheless I made a deal with myself to give it the old Girls Scout try despite never having been a Girl Scout.

So far so good.  The saddle fit and my vintage 1991 ACL repair didn’t scream at me.  I’ve been taking English riding lessons for the better part of three years so I tested my still-beginner knowledge on Mabel the Mule and discovered Mabel knows balance equitation too despite my only being allowed to use one hand on the reigns at all times.  Then we lined up, walked out of the ring, and turned onto Bright Angel Trail to begin our descent.  The first 50 feet was just like the trail ride at Rock Creek Horse Center but after the switch back, I lost what little nerve I had.

“Don’t hold your breath.  Exhale.”  I told myself as we rounded the first curve.  On the straightaway, Mabel took the outermost edge of the trail in order to see where she was going.  More self talk:

“Exhale.  Don’t lean."  I paniced some more because I can’t stear with one hand. "Don’t stear!!" I tell myself. "Mabel knows where she’s going.”

Soon I realized I wasn’t breathing I was only exhaling.  So I took a breath, then another shallow breath.  It wasn’t long before I was hyperventilating.  I kept my eyes up. I faced the wall.  I pulled Mabel off the weeds; she ran on the icy trail and caught up with Mule Three. We stopped. I looked down, saw Eric, burst into tears then put my head in my hands while Mabel enjoyed the view.

I watched Eric slowly ascend the trail.  The trail guides were beside me now wondering what I was going to do.  Not once did they try to talk me into continuing the ride down the Canyon.  Imagine I Love Lucy on the Mule only it’s not funny.  Rider Number 5 gave me an out when she said, “Mabel was riding rather close to the edge; I was afraid my Mule would follow her.”  I mouthed thank you and promptly dismounted.

Eric and I never made it to the Canyon Floor.  In December if you don’t get an early start on the trail, you lose light.  Instead Eric let me collect myself over an early lunch and big bag of salty potato chips before hiking the Kaibab Trail on South Rim. 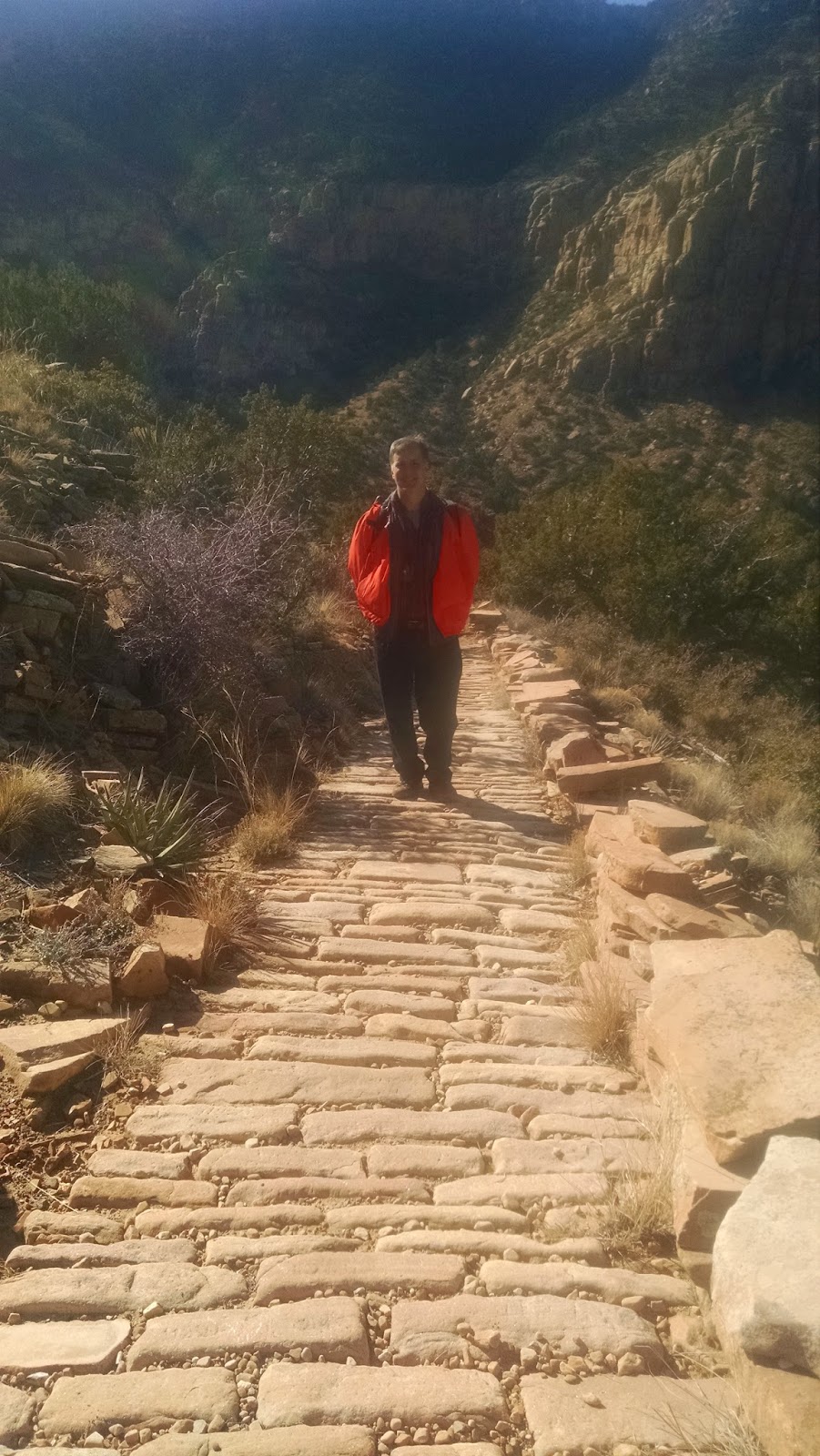 Honestly, I am so glad I didn’t ride the Mule.  The disappointment of letting my fear run rough shod over me was eventually replaced with a sense of pride.  That day, December 13th, was probably my steepest hike to date as we traveled South Kaibab Trail about 2 miles, 1200 feet down into the canyon and enjoyed a simple turkey sub on O’Neill Butte.

The next day we hiked another 1.5 miles, 1200 feet along Hermit Trail down to Waldron Trail Junction and enjoyed a vista still verdant and full of birds feasting in the brush.  It was here, along the Waldron Trail, that I discovered proof that one time, a long geologic time ago, water flooded the canyon when I picked up a piece a sandstone revealing a near whole, fossilized mollusk. 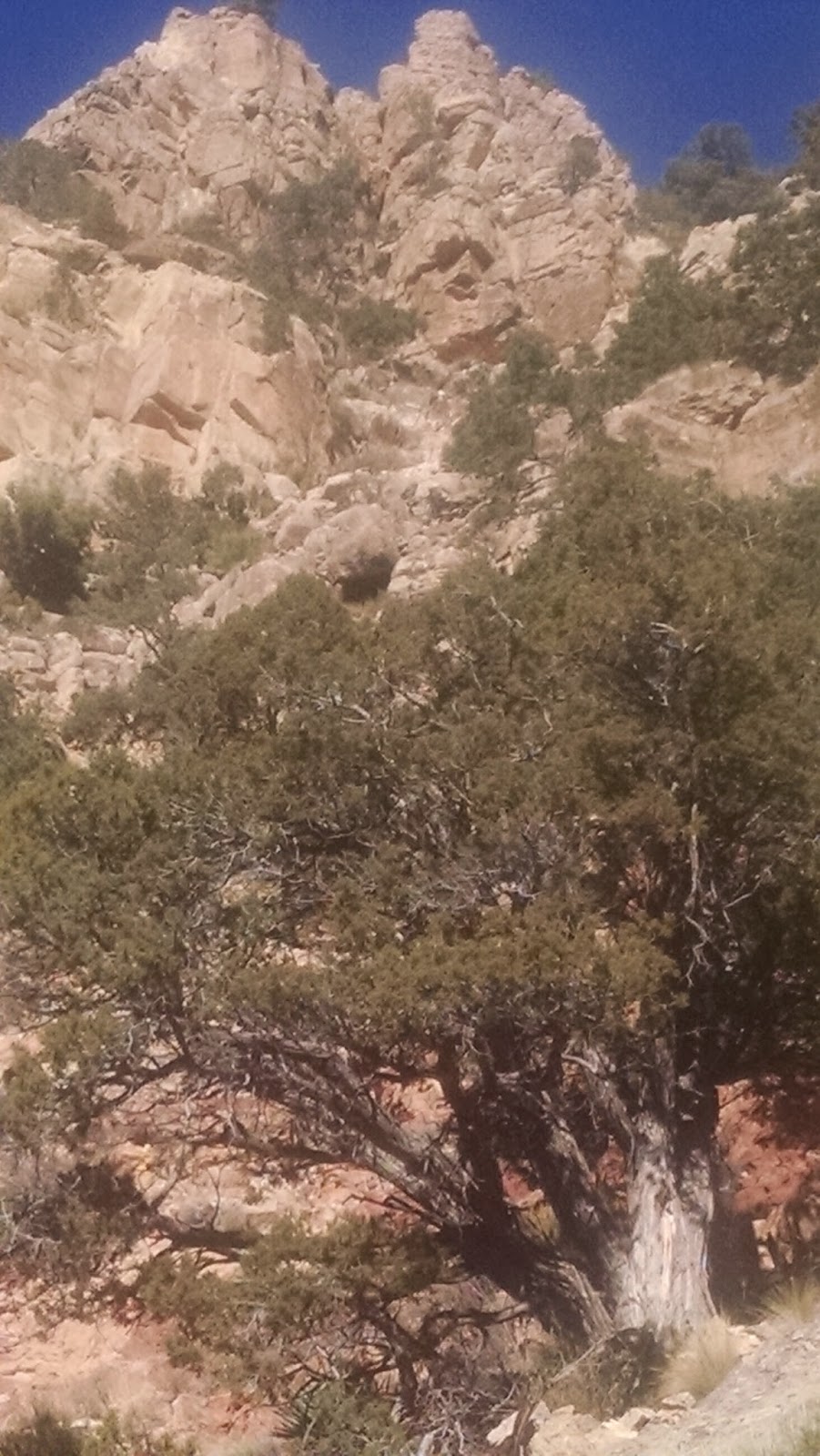 I am a Mule Fail and proud of it.  And even if I can’t hike to the canyon floor and back in one day like our bar fly can, I have discovered there is still more miles and elevation in me.  I don’t know if I will ever get back to the Grand Canyon because there are so many wonderful places to see.  But I do know that maybe this year, 2015, will be the year I tackle Old Rag in the Shenandoah Mountains.  But before I do, I will have to get this video clip out of my head or my heart will pound me into submission again.

BTW, cell phone pictures don't do the Grand Canyon justice, but if you ever find yourself on the Hermit Trail, look to the Rock Face for courage.
Posted by NITWit at 3:03 PM 2 comments: