On May 8th, Eric and I participated in our first bird count together for the benefit of one my favorite local charities – Audubon Naturalist Society located in Chevy Chase, Maryland.  Our adventure started at the “Bay House” with our friends Barbara, Eric, Greg and Barbara in Friendship, MD.  After breakfast and a lot of coffee, we began our count in the backyard, but before I could even adjust my binoculars, Eric, Barbara and Barbara started calling out species faster than I could write them. That’s when my Eric got the bright idea to simply record the names of the birds we spotted on his phone.

“Does it count if you see more than one?” Barbara asked.

(My friends were very eager to help me score big but double-counting is a no-no. J)

The Bay House is located at Holland’s Point, a mile from one of the Chesapeake Bay’s most popular marina’s, Herrington Harbor.  We counted many familiar species as we walked to the end of Holland’s Point, but when we turned onto Bay Avenue and followed the road to a small public beach, I  saw my first Life Bird of the day - Least Sandpipers.  They look and act alot like Sanderlings but something about their little legs screamed, “Take a closer look at me.” And I did. They were yellow! After consulting my guide book I learned Least Sandpipers are fairly common. The  yellow legs of Least Sandpipers are a destinctive field mark; Sanderlings have black legs. 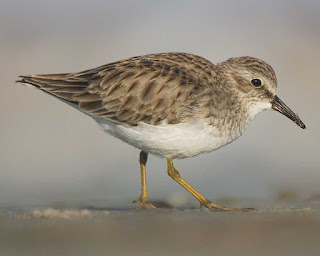 Field marks on birds are really important and up there with bird calls when it comes to properly identifying avian species.  These days I rely mostly on The Sibley Field Guide to Birds of Eastern North America because I like David Sibley’s illustrations but it turns out Roger Tory Peterson, who wrote the very first bird guide book, was also a member of our Audubon Naturalist Society.

To back me up, Wiki says,

He developed the Peterson Identification System, and is known for the clarity of both his illustrations of field guides and his delineation of relevant field marks.[4][5]

Paul R Ehrlich in The Birder's Handbook: A Field Guide to the Natural History of North American Birds (Fireside. 1988), said this about Peterson:
In this century, no one has done more to promote an interest in living creatures than Roger Tory Peterson, the inventor of the modern field guide.[6]

(That’s all the references I will detail because 1.) I have lost my MLA Handbook and fear I will royally screw up, 2.) who cares about references. This is my story and it is time to continue tallying the birds.)

On the return trip from Hog Point, Eric spotted a Common Yellowthroat Warbler. I missed it. And I was really mad about it too because it’s one of the few warblers I actually know since my orange tabby Rex dropped one at my feet when we were living in Baltimore.  I’ll never forget that little bird and our feeble  attempts to save his life. 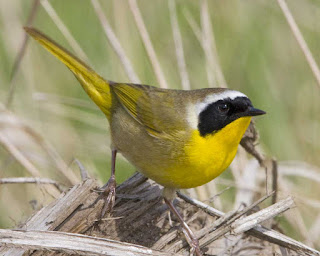 By Noon, Eric was urging me to pack up because we still had a lot of land to cover and birds to count before we reached our final destination at Walnut Point Inn on the Eastern Shore’s Tilghman Island.

Our next stop was Jug Bay Wetlands Sanctuary located on the Patuxent River in Lothian, Maryland.  We stopped here because last fall, when Eric was assisting me on my Chesapeake Bay Geology Report of the Patuxent River, we saw a Redheaded Woodpecker which is not to be confused with the Red-Bellied Woodpecker commonly seen and heard in my suburban neighborhood. (I recommend looking up their photos online.)  After a short while we were joined by more knowledgeable birders who told us Jug Bay is a popular fall migration place for Redheads to congregate.  Too bad.  I was hoping this bird would be the crown jewel of my bird count, however while we continued to talk with our new bird friends, they helped us identify our second Life Bird of the day – the Lesser Yellowleg Sandpiper! 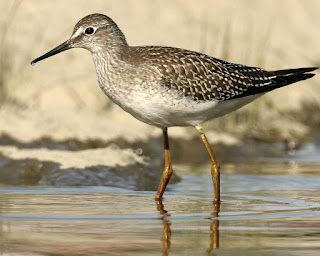 Before I go any further I must tell you the trick of expanding your Life List:

WRITE IT DOWN IN YOUR BIRD FIELD GUIDE!

Include the date and place where you saw it in your field guide so you never forget then count it on your Life List. It doesn’t matter that you might never know how to i.d. it again. The fact is if you saw it once, it counts.  As aside, a few years ago, I sighted a Life List Bird with my son Bobby at McKee-Beshers Wildlife Management Area in Poolesville, MD but sadly I let it get away because I didn’t rush right home and write it in Sibley. All I remember of it is that it had stilt legs and it was a juvenile but it’s gone now. Like the threatened species it probably is.

So write it down.

While at Jug Bay, we also saw a Scarlet Tanager. In fact, I should have mentioned it right away because it’s a Life Bird for Eric and probably my second or third time seeing it. 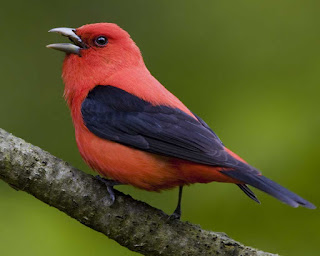 The rest of the birds we counted at Jug Bay is here; it’s a short list because we were impatient to get on the road again and cross the Bay Bridge.

It was 2PM by the time we were  back in our car and we were hungry so we abandoned our plans to go to Blackwater Wildlife Refuge and instead turned towards St. Michaels and Tilghman Island.

On the way to Tilghman Island, we saw our usual fine-feathered-friends, but it was not until we arrived at Black Walnut Point Inn and dared to enter the tick-infested pine forest that we saw lots of LGBs. (I know what you are thinking but LGB stands for Little Gray Birds and represent every species across the land when there is nary a field mark to see and identify it.) My guess is that we may have seen a Marsh Wren (definitely a Wren) and a Pine Warbler, so I counted it… and I hope you will indulge my fantasy because here’s another thing to know about Birders: we don’t tell fish tales.

During the fall and winter migration seasons, Black Walnut Point Inn is a great destination and one of my favorite bed and breakfasts.  Several years ago, Eric and I saw Canada Geese migrating by the 1000’s, flying in waves across miles of sky overhead Route 50. We saw Snow geese and Black Scoters that day too.  I share these birds sightings with you not because I can count them for the Birdathon, (I can't),) but because it's worth going to the Eastern Shore between December and February if you enjoy waterfowl.

The rules of Bloomin' Birdathon dictate I can only count birds and flowers I see within a 24-hour period.  For the record, I decided not to count flowers. So, in 10 hours, on both sides of the Bay, Eric and I counted 42 birds including two Life Birds for me and one more for Eric.  Next year we will try our luck counting songbirds in Western Maryland!  How tweet will that be?

Photo Credits: www.audubon.org
Posted by NITWit at 4:44 PM No comments: