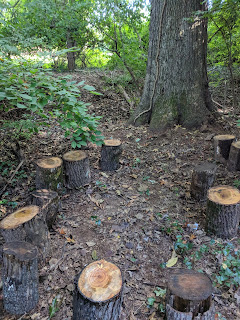 Maintaining focus was harder than I thought it would be. Todays scavenger hunt did not include looking for insects or other creepy crawlers. But right in the middle of my blah, blah, blah speech about these sacred woods and what to look for it  happened:

Mack practically jumped into my arms. (I think his name is Mack; they are all new to me.)  When I asked who likes spiders, everyone raised their hands. I like spiders too. Then we watched the spider  wind its way up over my head to feast on an insect it had caught earlier in its web.  Because we were already side-lined, I explained that spiders liquefy its preys guts and drink it. But here is the problem. I was not able to get a picture, therefore I cannot i.d. this spider. All I can say is that it was about the size of a wolf spider and it had a white patch on the back of its abdomen. There was no time for me to check out its web design because 1.) it was above my head and 2.) it was not the point of todays nature lesson.

THEN Gareth saw a worm, or so he thought, and he tugged my arm to get me to look at it.  It was a green, ½-inch worm and when it opened its mouth, it looked like his whole head was opening up.  Frankly, it reminded me of an alien movie. I was intrigued and really wanted to look at it longer but Gareth and I were the only ones who saw it. Then, as it happened, the 1/2-inch worm cut silk cord and dropped to the ground. Thank God because then I could get back to what I was doing…

BUT just as soon as we started on the scavenger hunt, someone shouted BEE! Is that a Bumblebee? NO, I replied. It’s a carpenter bee… or maybe a ground bee… I don’t know. But the bee seemed to be in  bad  shape so I moved it out of harms way.  No sense in anyone getting stung on their first day in Fernwood Forest.

Todays lesson was simply an introduction.  We weren’t supposed to talk about the animal kingdom yet.  But here is the thing: Fernwood Forest is a forgotten woods.  AND there is so much life in there!! I am looking forward to seeing things I haven’t explored yet and so are my  kids.

Posted by NITWit at 6:49 PM No comments: